Popular historians have done George Thomas a grave disservice.  True, his work at Chickamauga, where he earned the title "Rock of Chickamauga" by standing and fighting after his Commander and all of his fellow Corps Commanders fled the field, a work which saved the Union Army and bloodied the Confederates, is noted in passing, but Grant and Sherman have essentially buried his outstanding and extensive war record over time in a sea of misinformation and falsehoods, mostly in their memoirs.  Thomas made Grant and Sherman feel uncomfortable, no doubt insecure, so they tried to keep him under wraps, both during the War and thereafter.  They failed in the first endeavor; but have succeeded in the second far too long. 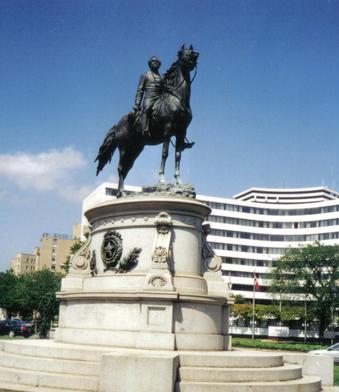 Contains running examples of popular history's errors and omissions, as they are discovered or appear.  If you agree with the premise of this site, you are encouraged to send in examples you may know of or run across.

Contains reference and source materials in support of the argument that history has falsely and grievously glorified Grant and Sherman at the expense of General Thomas.

I dare not go on without noting that this site is but a small, personalized version of what I consider to be the definitive George Thomas web site, Bob Redman's http://www.aotc.net.  My purpose here has been primarily to republish in a more readily available and readable "pdf" format the compilation of sources I have created in support of the cited proposition.  (The Compilation, which is Item 1 on this site's source page, appears on Bob's site, as well, along with other important materials)  Beyond that I want to assist in whatever way I can in redirecting credit for the North's success in the War from Grant and Sherman to Thomas.  Ultimately, however, what happens on this site will be whatever happens, as the site evolves.

I hope you enjoy this space. I encourage you to let me know what you think.  If you wish to do so, please go to page 4 by clicking on the link below.

This site is about a Civil War General, General George H. Thomas, who should be every American's hero.  He was, as the source material cited herein indicates, the chief conservator of the Union for President Abraham Lincoln during the Civil War.  It was he who captured Atlanta. He was the greatest General on both sides. Not Grant, Sherman. or Lee.  Thomas.  This site provides proof of the argument.